"Going Green!" is the hot topic nowadays and rightfully so. Even if you’re skeptical about global warming, the fact remains that the world faces a severe energy shortage as its population grows. It’s a simple case of supply vs. demand.

So what does this have to do with the family? Well, actually, quite a bit. First off, buildings contribute to energy use more than any other factor in the world. Not people. Not cars. Not flatulating bovines. It’s our homes, offices, and shopping centers. According to a recent article from the Sierra Club, the total monthly coal consumption for an average U.S. household is 1,140 lbs. In one month. That’s more than 3,000 pounds of carbon dioxide released into the atmosphere… each month… per family.

As Time reported back in December, "the U.S. has a renewable-energy resource that is perfectly clean, remarkably cheap, surprisingly abundant and immediately available. It has astounding potential to reduce the carbon emissions that threaten our planet, the dependence on foreign oil that threatens our security and the energy costs that threaten our wallets… And we don’t need to import it. This miracle juice goes by the distinctly boring name of energy efficiency, and it’s often ignored in the hubbub over alternative fuels…"

With a house full of kids, crazy schedules, and loads of laundry and dishes, it’s easy for a family to burn through a lot of energy. With a bit of discipline, though, it’s very easy to reduce your family’s energy consumption through some simple habits. Not only will you be reducing your impact on the environment and our nation’s energy consumption, you’ll also be putting money back in your own wallet. Estimates on savings range anywhere from 20% – 50%. Not bad, eh? Who wouldn’t mind saving 20% or higher on their utility bills each month?

So, here are a handful of simple things your family can do right now to use less energy and put more money in your pockets!

Use Those Funny Looking Curly Light Bulbs: Ok, so they cost $2 each, but they do last for 8 years on average. How many regular light bulbs do you go through in a year? Not only do you replace light bulbs a lot less often with these, but they use about 75% less energy… which is a 75% cost savings on your lights. That adds up quickly!

Unplug Things You’re Not Using: Not using your toaster at night? Unplug it. Do you shut down your computer or entertainment center at night? Unplug it. The average household is drawing at least 50W of electricity all the time simply from unused appliances. Even if they’re off, they still suck power when they’re plugged in. So, unplug the ones you’re not using and save yourself some money.

Turn Down the Thermostat: Programmable thermostats are nice, but if you don’t have one (or, like me, can’t figure out how to program it), you can always turn it up or down by hand. The fact is, your house doesn’t need to be 75 degrees at night in the winter or 65 degrees with the air conditioning blasting during the summer. Start by taking the heat you think you need and knocking off 3 degrees. In the summer, add 3 degrees to the air-conditioned temperature of your house, more if you can handle it. Better yet, open the windows when you can and just turn off the air altogether!

Reduce Your Water Consumption: Think about all the water your household uses! Do you leave the water running when you brush your teeth? Oops. Do you really need a 15 minute shower? Could you do with 10 minutes? Sure. Could you hand wash small loads of dishes rather than rinse them off in the sink only to turn around and run them through the dishwasher? We use way more than we need to, and we don’t even realize it. Simple steps to reduce consumption, even a little bit, add up to big impact. 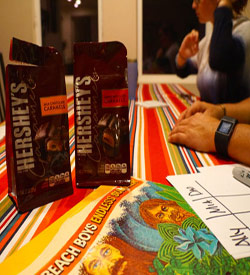